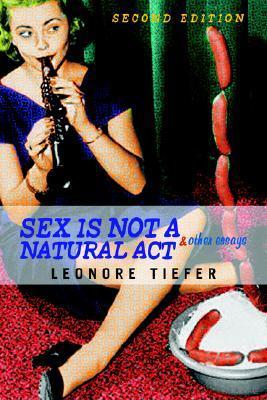 Click here to order from your local independent bookstore

Sex is Not a Natural Act, and other essays

Sex is Not a Natural Act: Table of Contents

Part One: Sex is Not a Natural Act: Theme and Variations

1. Am I normal? The question of sex
2. Social constructionism and the study of human sexuality
3. Sexual biology and the symbolism of the natural
4. Historical, scientific, feminist, and clinical criticism of the human sexual response cycle

1. Six months at the daily news
2. Kinsey lecture on kiss
3. From Niagara to Viagra: Why is it so hard to just talk about sex?
4. Interview in MS magazine
5. McDonaldization of Sex
6. Doing the Viagra Tango

1. An activist in sexology
2. Biological Politics (read: propaganda) Remains Alive and Well in Sexology
3. Gender and meaning in the nomenclature of sexual dysfunctions
4. Some harms to women of restrictions on sexually related expression
5. Toward a feminist sex therapy
6. The capacity for outrage: feminism, humor and sex

Part Four: The Medicalization of Sexuality

1. Sexism in sex therapy – whose idea is ‘sensate’ focus?
2. Women’s Sexuality, Not a Matter of Health
3. Medicalization of impotence: normalizing phallocentrism
4. Pleasure, medicalization and the tyranny of the natural
5. Sexology and the Pharmaceutical Industry: The threat of co-optation

The new "female sexual dysfunction": A story of medicalization, disease-mngering, and resistance

2016 public lecture on the role of the pharmaceutical industry in creating and promoting "female sexual dysfunction" in order to sell drug products.

Another Dr. Tiefer lecture on medicalization and sexuality from 2007 available on YouTube http://www.youtube.com/watch?v=_yUeVaU408s

Female Sexual Dysfunction: A Case Study of Disease Mongering and Activist Resistance
Provocative critique of how pharmaceutical companies create sexual disorders and the role of consumer activism and resistance.

Sex is Not a Natural Act, and other essays
Popular and professional writings on contemporary sexual life. "An important book"
--The Nation

A New View of Women's Sexual Problems
Diverse commentaries on the New View Campaign Manifesto, plus essays on new sex research on women